When sexual misconduct allegations against Harvey Weinstein first emerged, his wife of a decade was swift to leave him.

Not only had Georgina Chapman been betrayed by her husband, but his behavior also threatened the survival of her business, the fashion brand Marchesa.

Chapman, the British-born designer, filed for divorce in 2017 citing his ‘unforgivable actions’ for the reason for their break-up.

She then set about rebuilding her life, and securing her company.

The 43-year-old has kept a relatively low-profile during Weinstein’s rape and sexual assault trial in New York, that concluded with guilty verdicts of sexual assault and rape, but not guilty on predatory sexual assault.

And as the verdicts were declared at New York City Supreme Court on Monday, Chapman was not present.

Chapman is now said to be ‘smitten’ in a new relationship with Oscar-winning actor Adrien Brody, two years after she divorced Weinstein.

Brody and Chapman, who initially met through Weinstein, were introduced ‘properly’ at a swimwear launch in Puerto Rico, where they reportedly ‘bonded over cocktails’. 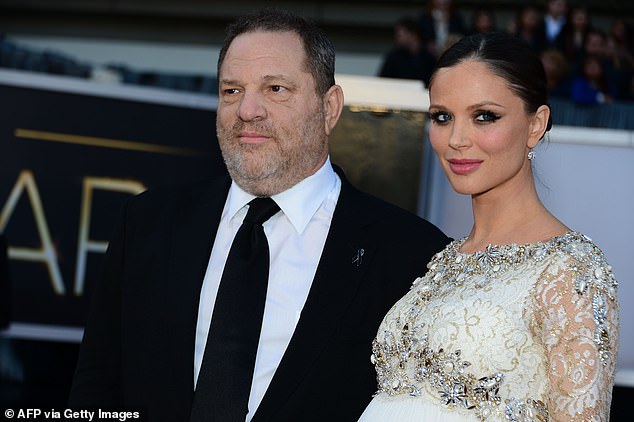 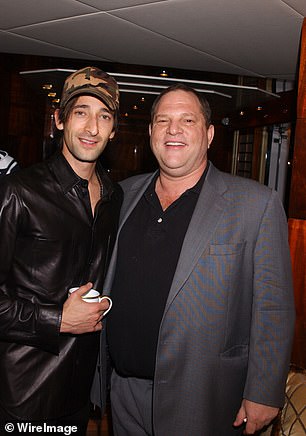 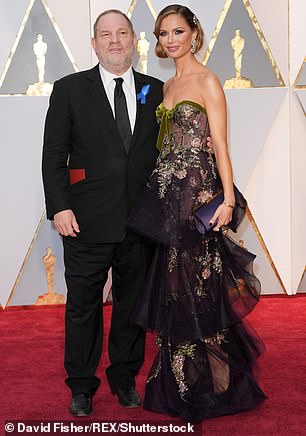 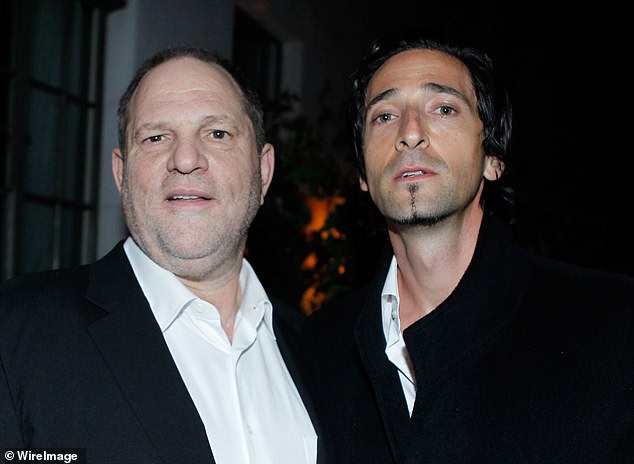 Brody, who was formerly a friend of Weinstein, has appeared in two productions made by the producer’s company, Miramax.

In 1994 he starred in Jailbreakers and in 2005 he featured in Hollywoodland alongside Ben Affleck.

As accusations against Weinstein began piling up, revelations that the mogul once bullied stars into wearing his wife’s designs also emerged.

The Daily Beast claimed to have found a series of connections between Marchesa and a company linked to Weinstein listed as ‘doing business as’ Marchesa.

Weinstein went to his then-wife’s Marchesa fashion show after the New York Times published their sexual misconduct expose in 2017.

It was feared the brand, which had dominated the red carpet for years, may have suffered irreparable damage to its reputation as Hollywood stars distanced themselves from the label.

At the 2018 Golden Globes Chapman’s high-end brand failed to make an appearance with not one single star choosing to wear one of her designs.

The Globes the previous year, Marchesa dressed the likes of Chrissy Teigen and Heidi Klum and in 2016, Zendaya, Viola Davis and Lily James all wore Marchesa.

In January 2018, Chapman canceled a runway show for Marchesa’s collection, which fueled rumors the brand sh co-founded with Keren Craig was in trouble. 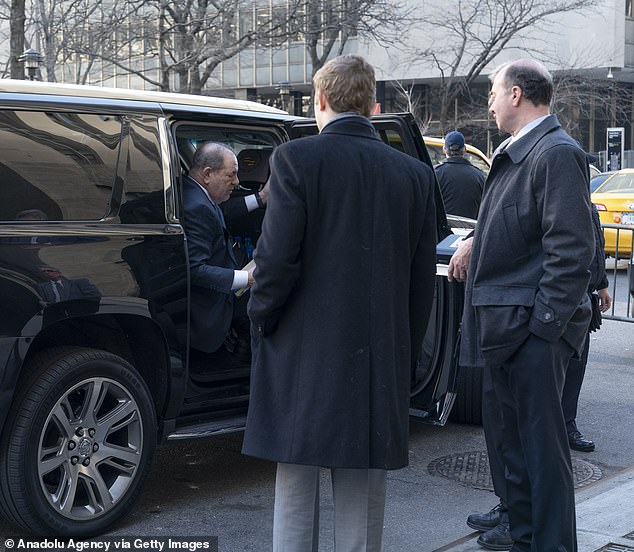 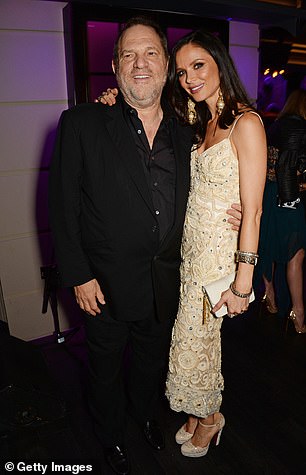 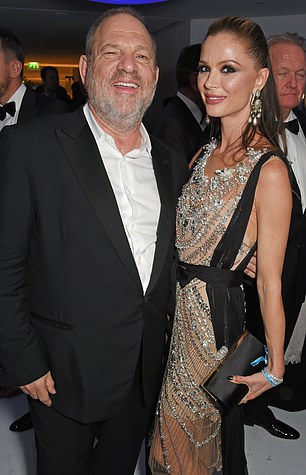 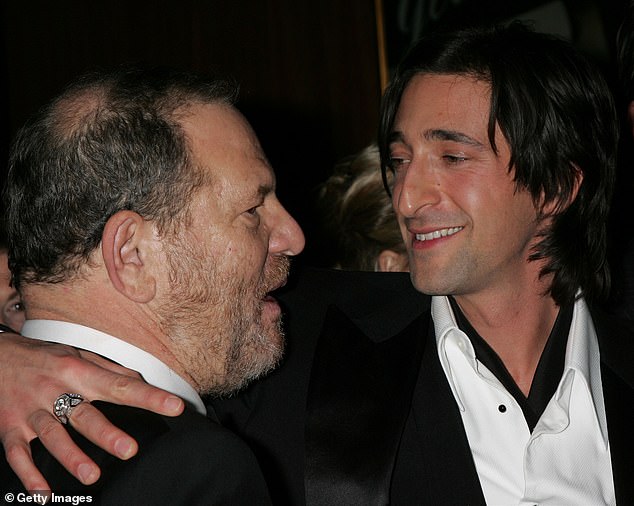 Brody and Chapman, who initially met through Weinstein, were introduced ‘properly’ at a swimwear launch in Puerto Rico, a source said, where they ‘bonded over cocktails’ (Pictured: Weinstein and Brody in 2006)

The label has regularly been worn on the red carpet by A-listers such as Jennifer Lopez, Sandra Bullock, Scarlett Johansson, Kate Hudson, Priyanka Chopra Jonas, Blake Lively and the Duchess of Cambridge.

But nearly three years since the scandal first rocked Hollywood, stars have begun to return to the clothing line.

Many stars have offered support to Chapman in the wake of her ex-husband’s court case, with Johansson picking a Marchesa gown to wear to the Met ball in 2018.

She said at the time defending her decision: ‘I wore Marchesa because their clothes make women feel confident and beautiful and it is my pleasure to support a brand created by two incredibly talented and important female designers.’

Vanessa Hudgens followed Johansson’s lead and wore a Marchesa gown to the premiere of her film Dog Days in August of that year.

Chopra also rallied behind her friend, saying it was unfair to punish Chapman over something her husband was alleged to have done.

She told WWD in 2018: ‘Georgina’s a friend of mine, and it’s not her fault. I don’t think it’s right to take it out on a self-made woman what somebody in her life did.

‘That’s the wrong attitude. I’ve known her for years, and that was a beautiful gown and deserved to be worn by a bride-to-be. And it made me feel like a princess. It was the right choice. Women supporting women: that’s what we’re all about.’

At the Met Gala last year Chapman made her first red carpet appearance since the Weinstein scandal. 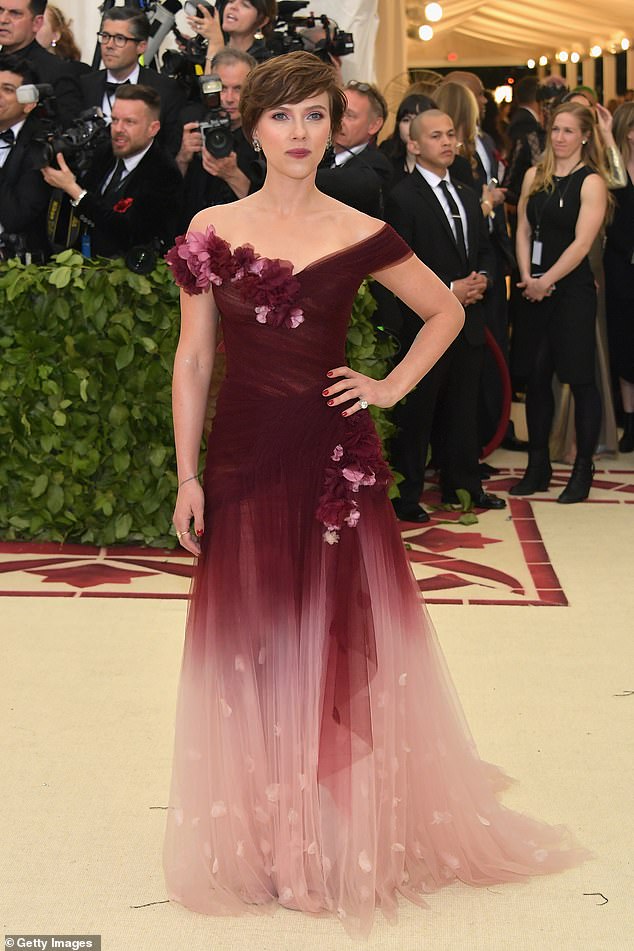 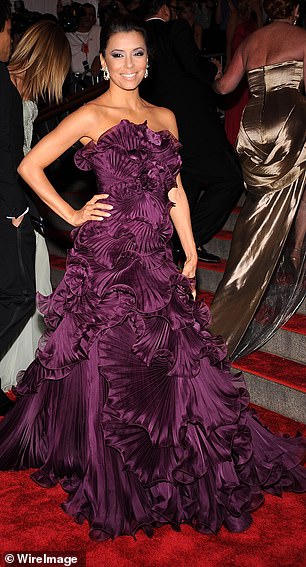 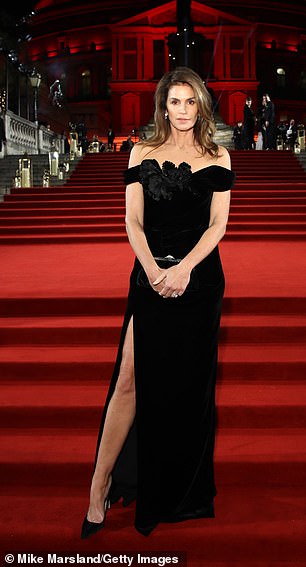 Eva Longoria-Parker at the Met Gala (left) and (right) Cindy Crawford arriving at The Fashion Awards 201 at the Royal Albert Hall in London, both wearing Marchesa 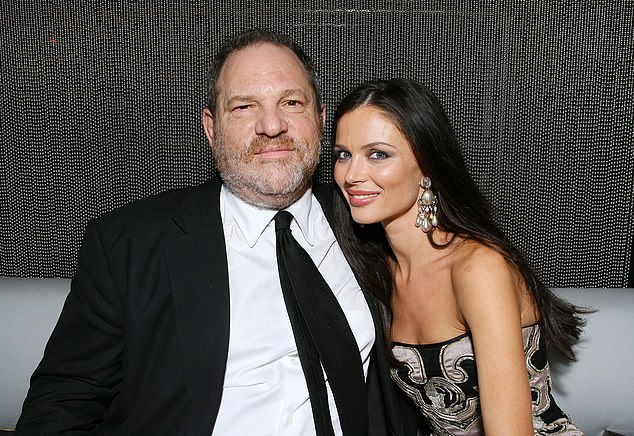 Weinstein and Chapman at the OK! Magazine and Gen Art party in New York in 2008. The couple divorced in 2017

Appearing on The Late Show in May 2018, the Vogue editor-in-chief Anna Wintour told Stephen Colbert: ‘Georgina is a brilliant designer, and I don’t think that she should be blamed for her husband’s behavior.’

Chapman married Weinstein in 2007 and they have two young children, India, nine, and Dashiell, six.

The British designer announced their split in 2017, saying: ‘My heart breaks for all the women who have suffered tremendous pain because of these unforgivable actions.’

Following the break-up, she took their children from their Los Angeles home and sold the property.

Weinstein will reportedly pay Chapman a divorce agreement worth roughly $15million to $20million.

The pair began dating in 2004 and married in Connecticut in December 2007, before she filed for divorce following allegations by at least 80 women against the producer for sexual misconduct, harassment, and sexual assault.

When asked by Vogue in 2018 if she was ever suspicious about her husband’s behavior, she replied: ‘Absolutely not, never.’

Chapman told Vogue how she felt ‘naive’ when the allegations first broke. 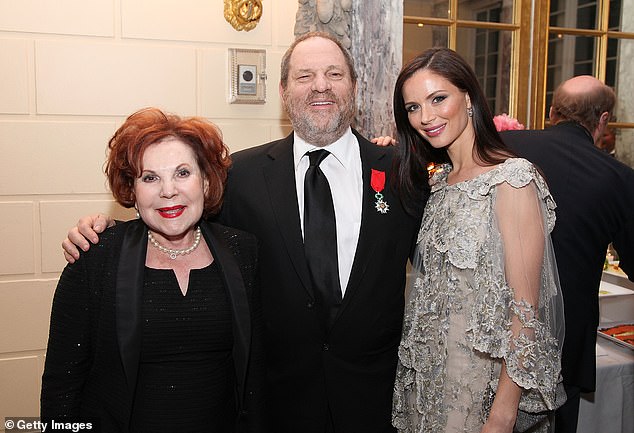 Miriam Weinstein, producer Harvey Weinstein and Georgina Chapman at a reception for the screening of ‘The Intouchables’ at the French Embassy in New York in 2012

The London-born clothing designer went on to describe how ‘caring for my young children is my first priority’.

She said: ‘And I have moments when I just cry for my children. What are their lives going to be? What are people going to say to them? It’s like, they love their dad. They love him. I just can’t bear it for them.’

Weinstein was convicted on Monday by a New York jury of sexually assaulting former production assistant Mimi Haleyi in his apartment in 2006 and raping aspiring actress Jessica Mann in a hotel room in 2013.

He was acquitted of the two most serious counts of predatory sexual assault, which each carried a potential life sentence. He was also found not guilty of first degree rape in relation to Mann.

Weinstein, who arrived at court using a walker for much of the trial, now faces a 29-year prison sentence.

He was due to be sent immediately to Rikers Island prison following the jury’s verdict but was rushed to hospital with chest pains and heart palpitations.