Drugmaker Moderna has shipped its first batch of a possible coronavirus vaccine for humans to government researchers for testing, just three months after the virus’s genome was sequenced.

Shares of the biotech company soared early Tuesday, a day after the company said it sent vials to the National Institute of Allergy and Infectious Diseases for early-stage testing in the United States.

More than 80,000 people have been infected globally from the viral outbreak that began late last year in China.

A total of 35 cases have been reported in the United States and more than 2,600 people have died from the virus in mainland China, including one US citizen.

The vaccine is designed to target the spike protein on the surface of the virus that allows it to invade and infect human cells.

Its development has moved very rapidly, but it could take 18 months or more for the shot to be ready, even it it proves safe for human use, experts have previously told DailyMail.com.

Drugmaker Moderna has shipped its vaccine for coronavirus, which targets the spike on the outside of the coronavirus that lets it infect human cells (seen in the above image of the virus)

The drugmaker’s announcement comes as the Trump administration requests $2.5 billion to address the coronavirus outbreak in the US and abroad.

Additional funding from Congress is intended to go to quarantine and containment efforts, as well as the development of vaccines and treatments for the virus.

Moderna has been granted funding from the Coalition for Epidemic Preparedness Innovations (CEPI) to expedite vaccine development.

It has also partnered with the National Institutes of Health (NIH) and universities to use its cutting-edge vaccine development platform in the hopes of creating a preventive method for the disease as quickly as possible.

Among the universities it’s worked with is the University of Texas, Austin, where researchers recently developed the first 3-D model of the virus’s spike protein.

In order to map the protein, they had to recreate the virus component, and discovered that this had vaccine potential.

The team there had been studying related viruses – those behind the 2003 SARS outbreak and the 2012 MERS outbreak – for years, and that gave them a leg up in researching the new virus.

University of Texas has not confirmed that their vaccine candidate is the one shipped by Moderna, but Moderna described their vaccine as being based on the same structure the researchers there have been working on.

Coronaviruses, as a family, are named by the resemblance of their shape to a corona, or crown (not to be confused, as many social media users have done, with the beer).

Bacteria are cells, made up of organelles, the same basic structures that make up humans, animals and plants, but viruses are built different.

Instead, they consist of just either DNA or RNA, enclosed by a protein shell, called a capsid. Some have an additional outer layer.

One virus differs from another in its genetic makeup – the RNA and DNA – and the proteins on its exterior that give it the ability to penetrate the membranes of other cells.

Coronaviruses are ringed by spiked shells that give them the resemblance of a crown.

These spike proteins appear as slightly fuzzy points protruding from the circumference of each virus particle in  the vibrant photos released by the NIH.

Sequencing the new virus’s spike proteins is what allowed other NIH scientists – namely, Michael Letko and Vincent Munster – to identify it as a close relative of SARS. 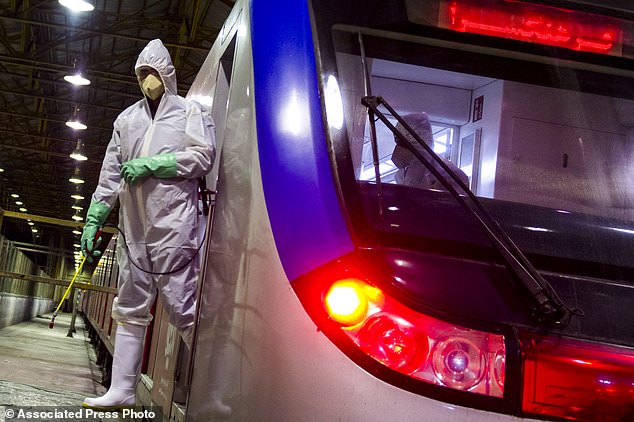 Workers disinfect subway trains against coronavirus in Tehran, Iran. More than a dozen people had died from the new coronavirus in Iran, officials there said, rejecting claims of a much higher death toll of 50 by a lawmaker from the city of Qom that has been at the epicenter of the virus in the country (Sajjad Safari/IIPA via AP)

And its similarity to SARS led the World Health Organization to not only name the virus SARS-CoV-2 (and the disease it causes COVID-19), but to create a naming convention that links the two viruses together.

‘[The newly-developed] mRNA-1273 is an mRNA vaccine against the novel coronavirus encoding for a prefusion stabilized form of the Spike (S) protein, which was designed by Moderna in collaboration with NIAID,’ the company said in a statement.

‘What could be is the protein that we produced to determine the structure.’

Several US companies are racing to produce the first vaccine, including another Texas startup, Greffex, which claimed to complete its vaccine last week.

Moderna appears to be the first, however, to announce that its candidate vaccine is entering phase 1 clinical trials.

The stock started trading in late 2018 and set an all-time high price of $29.79 last April, according to FactSet.